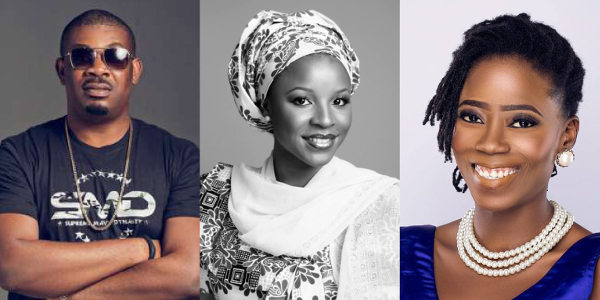 His flair for music, singing and playing the drums dates back to when he was age four.

Street-wise Don jazzy, while growing up in the slums of Ajegunle in Lagos metropolis did odd jobs to survive; he later worked as a security guard at a McDonald’s outlet when he lived in London. His rise to multi award-winning record producer, singer-songwriter, renowned musician and the Chief Executive Officer of Mavin Records in Nigeria makes a strong point that hard work pays.

When the musician left Mo’Hits Records, which he co-founded with Dbanj in 2004, after a business and musical collaboration that lasted eight years many would have thought his lights would go dim in the Nigerian entertainment business. However, his decision to launch Mavin Records marked a major positive turn in his career, and which also demonstrated that his success at Mo’Hits Records was not a fluke.

All the accolades, coupled with Jazzy’s great dexterity in music production, has earned him a pride of place among icons in the Nigerian music and entertainment industry, while his soaring popularity among the youth in Nigeria makes him a role model. Indeed, his dream to see Mavin Records  become a music powerhouse in Africa in the shortest possible time must be closer to realization than ever.

For Aisha, the gift of a camera she received from her father on a birthday anniversary many years ago inspired her to choose a career in Photography. Although the profession of photography usually received less than an enthusiastic acceptance among many people, especially in the northern part of Nigeria where Aisha grew up and still lives, she has not been deterred from her dream of becoming a photographer of national and global repute.

This photographer on the rise has made some mark in the areas of local and International photography and film making. Her early passion for the lens has turned out a positive achievement in a profession dominated by men and further reinforces the saying that “what a man can do a woman can do better”. Her story serves as a moral booster to many other women who might be considering photography as a career.

Aisha’s passion to use her art to secure the attention of people and society for a good cause spurred her to use her camera, and the photographs from it, as a voice to mobilise awareness, support efforts to find cures and galvanize public support for people battling cancer, sickle cell anaemia and other ailments. Her efforts as a journalist are equally aimed at poverty alleviation and entrepreneurship development efforts.   Her first solo photographic exhibition in 2014, entitled “Alternative Evil”, was aimed at sensitizing teenagers against addiction to smoking.

Several of Aisha’s works have been exhibited locally and in foreign countries. They include “50 years ahead through the eyes of Nigerian women”, (Schlumberger, The Embassy of the Kingdom of Netherlands, African Artists Foundation); “Here and Now: Contemporary Nigerian and Ghanaian Art” New York, USA, October, 2010 (Iroko Arts Consultants, Mrs Ronke Ekwensi), and “The Authentic Trail: Breast Cancer” Fundraising Exhibition, Abuja, Nigeria, October, 2010 (Medicaid Diagnostics, Pinc Campaign, Aisha & Aicha) among others.

In 2009, Aisha co-founded The Photowagon, a collection of Nigerian photography, and she has many awards to her credit as a professional photographer.  She won the British Council “Through-my-eyes” competition in 2014; the Sisterhood Award for photographers of the year in 2014 and the 2011 Creative Artist of the Year, at The Future Awards.  In 2010, Aisha was honoured as one of 50 Nigerian women in a coffee-table book and exhibition for the nation’s 50 @ 50 celebrations supported by Women for Change initiative. Following her passion for her career has made her a role model to women folk and young people generally who could get inspired to pursue their dreams in any career, no matter the sentiments society shares about a vocation.

Aside from being an on air personality (OAP) known for her morning show on radio 90.9, Lagos and better-known for her peculiar Areaaaa! slogan, Tosyn Bucknor does many other things which makes her probably the most difficult personality to describe among the many young, multi-talented and successful Nigerians.

For Tosyn, her versatility could be something she inherited from her mother, whom she calls a strong woman who does a lot of things. She is a radio and TV presenter, a blogger, a singer, a songwriter and writer who has never allowed any obstacle to stop her from engaging in productive enterprises.

She also carries the sickle cell trait, which can sometimes be a very difficult cross to bear, especially as one carries out day-to-day activities. This important aspect of Tosyn’s life story is and should clearly be an inspiration to those in our society who also find themselves living with sickle cell anaemia.

Tosyn was recognized as the Most Popular Radio Presenter in Nigeria in 2013, courtesy of the Nigerian Broadcasting Merit Awards; she also dreams of becoming an award-winning actress one day.